Skip to content
Connect with me @TeddyWarner on LinkedIn

Many modern small chipsets rely on the Unified Program and Debug Interface (UPDI), a one-wire interface allowing for the changing of fuzes, burning of bootloaders, or uploading of sketches to any AVR Dx-series parts or any modern AVR Microcontrollers. Due to their reliance on the Unified Program and Debug Interface, these parts cannot be programmed with classic ISP style programmers, and thus a UPDI enabled programmer is required. Although UPDI is the only programming option in the case of these parts, the one-wire interface is superior to the four-wire of a classic ISP programmer and allows for quicker programming setup and less cluttered boards due to fewer programming pins. This USB-C UPDI programmer is built with a Ft232rl chip allowing for serial interfacing, and runs alongside the megaTinyCore library witch equips your IDE for serial UPDI programming via a portable python implementation.

In short, the megaTinyCore library is “An Arduino core for the tinyAVR 0-series, 1-series, and now the 2-series”(mTC Gtihub). The megaTinyCore project was created and maintained by SpenceKonde. As mentioned above, the library equips your IDE for UPDI programming via a portable python installation and can be used alongside a handful of different programmer types. The USB-C UPDI Serial programmer documented alter on this page is currently the optimal choice out of these options due to its low component requirement and faster speeds than other programmers. In addition to serial programmers, One can use a 328p based board as a programmer (i.e. an Arduino or any of its clones) via megaTinyCore’s jtag2updi sketch, or a designated microchip programming board or and UPDI programming tool that mimicks any listed above. Dr. Adam Harris, a mentor of mine during my cycle of Fab Academy has a Simple Fab-jtag2UPDI Board project where a 328p based board is used alongside the jtag2UPDI sketch and is a great option when creating an In-Circuit programmer though the library. I manufactured this board during my Electronics Production and continued to use it for the next 16 weeks of the course.

Arduino 1.8.13 is recommended for use with the megaTinyCore library

As mentioned prior, jtag2updi is a sketch from the megaTinyCore library, allowing for the use of a 328p-based board (i.e. Arduino or a clone) as an In-Circuit programmer. To begin with, this programming approach, download the latest version of the jtag2udpi sketch via the button above (Code -> Download Zip).

Inside of this jtag2updi folder, navigate to the jtag2UPDI.ino project - circled and highlighted below - and open it in your IDE. 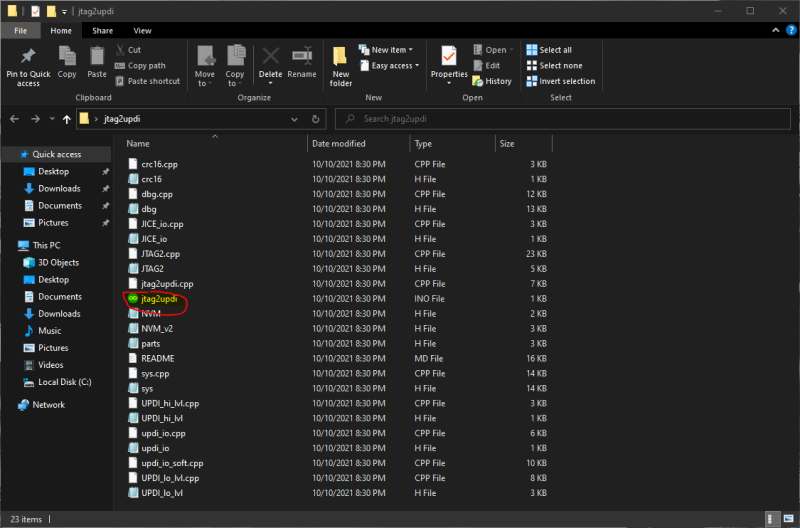 This will open the jtag2updi project file system, leaving you with a blank jtag2updi sketch followed by multiple file tabs in your IDE (like shown in the picture below). 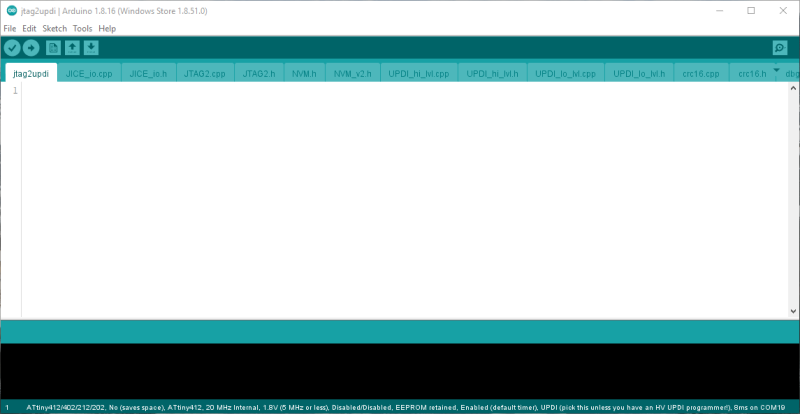 You can next upload this sketch to your 328p-based board of choice as you would any other sketch. As a first test to confirm the successful upload of this sketch to your board, hook up an LED to pin 6 of the board. If the board is successfully programmed, the LED will be dimly lit as shown below. This simple test eliminates a potential error while troubleshooting a project, and confirms the programmer’s working condition.

Once a board is programmed with the jtag2updi project, it will act as a programmer until the next sketch is uploaded, unless the board’s reset line is cut.

To make use of a jtag2updi enabled In-Circuit programmer board, prepare a sketch in your IDE to upload to your desired board. For documentation purposes, I’ll be uploading the simple blink sketch included below to a super simple ATtiny 412 based LED board I made in week 4 of my Fab Academy cycle and documenting it for use with the Arduino IDE.

Following these steps on my simple ATtiny 412 board yielded the 1/2 second blink example below.

Congrats! you can now program any modern AVR Microcontrollers via UPDI and a jtag2updi enabled 328p-based board.

If not creating your own board, and there’s no inline UPDI resistor, you’ll need to include this resistor externally. With that said, wiring between your serial adapter and the target device is diagrammed in the schematics below.

Ideal - internal resistor in the adapter - not more than 1k

I rigged up the second included schematic on a breadboard as unfortunately the blinky board I’m programming doesn’t have a valid inline resistor I can use. 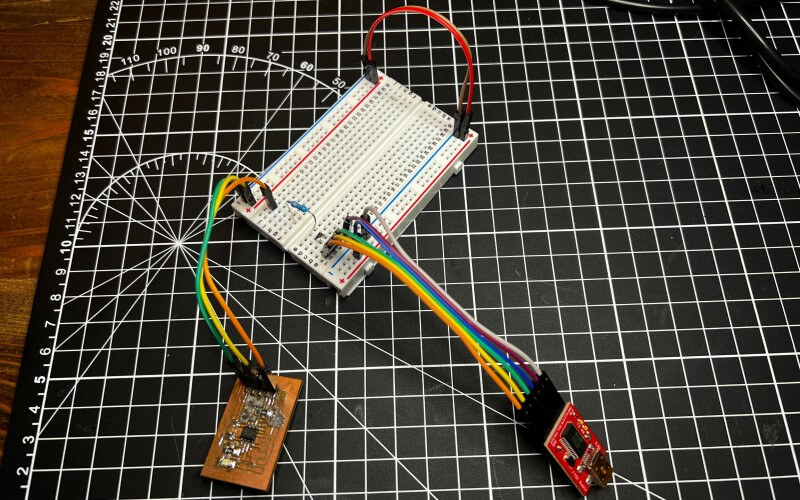 Serial Programmer Setup on a Breadboard

To program via your USB-Serial setup …

Note - the serial programmer setup does not give you a serial monitor - you’ll need to connect a serial adapter the normal way for that. The later documented USB-C UPDI Serial Programmer board provides a switching feature between a serial programming and serial monitoring mode, allowing for all programming and monitoring work to be done without rework of connections. Be sure to check out the specific USB-C UPDI Serial Programmer usage section for use of this feature.

For this example, I modified my prior used blink sketch to run a 5-second delay as opposed to the prior 0.5 seconds…

I uploaded this via the three-step process listed above, yielding the successful results below.

Congrats! you can now program any modern AVR Microcontrollers via UPDI with a simple USB-Serial adapter with a speed increase by a factor of twenty when compared with the prior jtag2updi method.

I made countless PCBs during my cycle of the Fab Academy, one of the first being a tool to program the rest, an In-Circuit Programmer. Being one of the first boards I fabricated myself, from the PCB milling to soldering & stuffing, I hadn’t yet taken up the practice of designing my boards, and for this assignment, fabricated the In-Circuit Programmer design of one of my mentors, Dr. Adam Harris. This board is a specialized Arduino-like board, running on an ATMega 328p with a programmer sketch provided by the megaTinyCore library. The In-Circuit Programmer I fabricated in Fab Academy’s operation is great, but due to new updates in the megaTinyCore library, the process can be optimized for faster speeds, and the board size and component requirements can be reduced. This board marks my first steps into the world of multi-layered PCB design and fabrication, a process I’m super pumped to pick up and apply to future projects.

The USB-C UPDI Programmer is a specialized piece of hardware for use with the prior discussed serial programming method and has a couple of advantages over rigging a programmer up on a breadboard. A permanent piece of the hardware enables the serial programming method to require a bit less setup, once the board has been made. Following that, this board includes “modes”, allowing switching between serial programming and monitoring functions. When rigging a serial programmer up via a USB-serial adapter as documented prior, you cannot monitor serial from the board at the same time, but instead are required to require the board to the USB-serial adapter. The switching of “modes” on this programmer eliminates this extra hassle, handling all the required connections at the flip of a switch located on the board’s underside.

It was this elimination of hassle that pushed me to create this piece of hardware, yielding a simple workflow when serial programming. The USB-C UPDI Serial Programmer is based on the FT232RL IC, handling the USB protocol and USB to serial data transfer on the programmer.

The FT232RL is broken out following the same wiring principals diagrammed in the prior serial programming documentation, converting the IC’s Rx and Tx lines to a UPDI line, routed to a programming pin. Just before this Rx and Tx junction, a Double-Pole Double-Through switch allows for the switching of this conversion to UPDI to straightforward Rx and Tx lines, routed each to their corresponding pin. Thus, the programmer board includes a UPDI, Rx, and Tx output pin, in addition to a VCC and GND line. This 5 pin programming pinout can be mimicked on any board containing a AVR Microcontroller, allowing for programming and monitoring functions to be switched without reworking connections between the programmer and board. 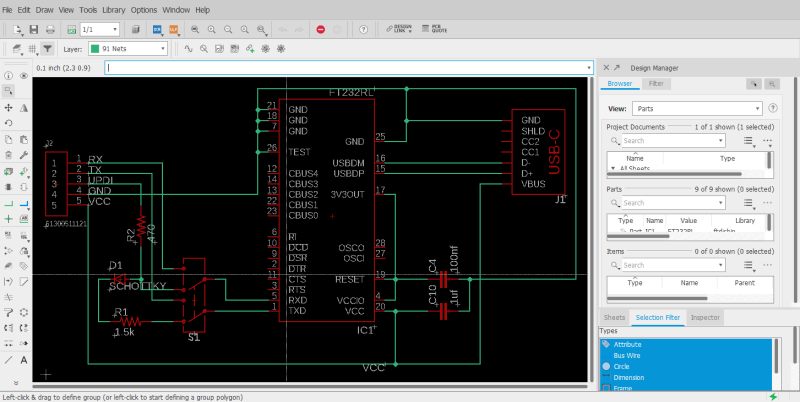 Then came the nesting process. Being my first double-sided board in Eagle, it took some work to get used to the use of vias between sides, but eventually, I worked out the process of changing Vias class through Eagle’s Change -> Vias tool. I ended up using 0.6mm rivets for this board’s vias, using 8 on the board in total. I nested bards on the board, including both the FT232RL and the USB-C female adapter on the top side, along with some smoothing capacitors, and on the bottom, the UPDI programming component array, as well as the DPDT switch.

The nesting of the two highest pinout parts on the boards topside inspiring my next experiment with this board, Solder Paste Stencil making. Although I feel pretty confident in my SMD soldering skills, soldering pads this small wouldn’t only be a hassle, it would also be tedious time waste, and thus I settled on a solder paste stencil approach for the boards topside, while hand soldering the bottom half. I exported the Tcream layer of my programmer board from Eagle as a .pdf for cutting of the stencil from cardstock on a Epliog Fusion Pro 48 laser. 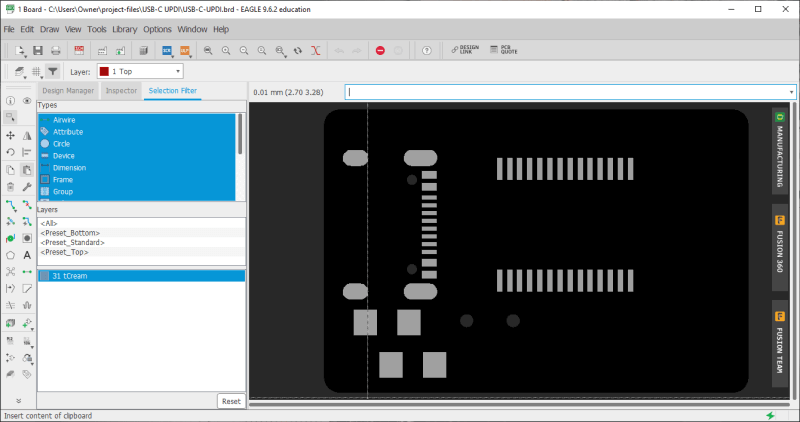 Tcream board layer in Eagle

Comment Form is loading comments...
Back to top
Copyright 2021 Teddy Warner - MIT License
Made with Material for MkDocs